SAMRO to debut songs of hope by top SA composers 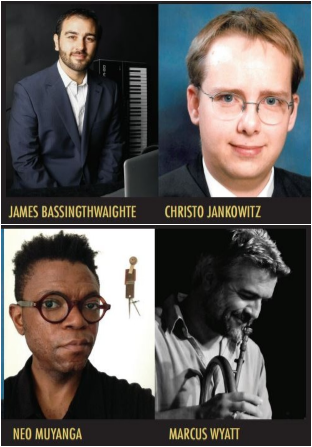 Optimism is at the core of four songs inspired by the National Development Plan and premiering at the 2015 SAMRO Overseas Scholarships Competition.

Neo Muyanga, Marcus Wyatt, James Bassingthwaighte and Christo Jankowitz were commissioned by the SAMRO Foundation to craft new compositions for the competition. Their brief was to use the preamble to the National Development Plan – the government’s blueprint for eliminating poverty and reducing inequality in the country by 2030 – as their inspiration and source material.

This vision statement was written by poet Antjie Krog and academic and writer Prof Njabulo Ndebele, and lays out an optimistic dream for a future South Africa. The composers’ task: to take the words and make them dance to music, lifting the text off the page and into the realm of living art.

In the intermediate round of the competition, to be held at Johannesburg’s Linder Auditorium on 27 August 2015, the six Western Art Music candidates will be required to sing the new work!ke e:/xarra//ke by Muyanga. The jazz semi-finalists will perform the song We Know by Bassingthwaighte, himself a former SAMRO scholarship winner. Semi-finalists will also have the opportunity to sing repertoire of their own selection.

Two finalists in each music genre will be selected by adjudicators to compete in the final round, also at the Linder Auditorium, on Saturday, 29 August 2015. In addition to their own choice of material, they will be singing Connected by Wyatt (jazz finalists), arranged for big band, and Dream of a Rainbow by Jankowitz (Western Art finalists). Jankowitz is also a previous two-time merit award winner in the SAMRO scholarships competition.

On the line are two R170 000 scholarships to study or enroll in music master classes abroad, as well as a number of merit and subsidiary cash awards.

The composers had this to say about the prescribed works that they wrote specially for the SAMRO Overseas Scholarships Competition, and how they went about balancing the vision statement’s positive and more sobering elements while crafting the works:

“‘!ke e:/xarra//ke’ is a phrase in the /xam [Khoisan] language, which literally means: ‘diverse people unite’. It is the motto emblazoned on South Africa’s national coat of arms.

“I wrote this work as an anthem in response to two very key happenings this year: (a) the horrific attacks perpetrated by South Africans against immigrant black Africans now living in South Africa; and (b) as a way of thinking through a project I was curating in Brazil called ‘Revolting Mass’. It’s a project with the Goethe-Institut that seeks to understand the aesthetics of protest and the politics of belonging in the pan-Africa of today, from the perspectives of both the African diaspora and the global south.

“While considering the commission brief for what was to become !ke e:/xarra//ke, it occurred to me that what was very much in the foreground in the preamble to the NPC report spoke directly to the issues indicated above.”

“The text wasn’t written as lyrics, so the biggest challenge was to mine the text for excerpts that would work in the setting of a song. I decided to focus on the experiences that we as South Africans have in relationship to the goals as laid out in the text.

“Regarding the music, I tried to make sure that while the melodic and harmonic content of the song was academically challenging for the artist, it would nonetheless be a fantastic listening experience for the audience when performed.”

“It was the feeling of the text as a whole and the positive message behind it that inspired the main theme of Connected. However, there are many challenges facing us as a nation, and the scars of our collective past mean it is not all always smooth sailing – thus, the composition goes through many different stages and modulations.

“Despite these key changes and tonal centre shifts, the composition remains hopeful and uplifting and always returns to the central theme: “We have travelled so far to be here in this moment / Will you not listen now, hear the laughter of our children, cherish their dreams / How clear is our future now.”

“Overall, the message of diversity and positivity is key to Connected. In terms of the range, the piece spans two octaves in its extremes and, of course, the fairly regular key changes will keep the singers on their toes, so to speak!”

“This text expresses a wide spectrum of ideas, concerns and sentiments in order to convey a central message of vibrant optimism about the state of our nation by the year 2030.

“Choosing salient stanzas and lines from the vision statement, I started working on the music with the view to conveyingthis atmosphere of ebullience while simultaneously giving acknowledgement to the passages where darker sentiments were expressed.

“The choice of the musical language, in honour of SAMRO’s selection ofthis particular text, was made in order to challenge the vocal prowess of each competing candidate in the competition and also to connect with as wide an audience as possible. Though the music is grounded in a traditional harmonic language, I strove to offerenough contemporaneity to reflect that it is conceived as being born of the present time.

“The piece needed to challenge a singer who has a very high level of technical and artistic proficiency. I therefore spunthe musical texture in such a manner that the accompaniment itself would only give support to the voice, but not give the melodic line itself. This then challenges the singer to be solely responsible for providing the melodic line throughout.”

The final live round of the SAMRO Overseas Scholarships Competition will take place at 6.30pm at the Linder Auditorium in Parktown, Johannesburg, on Saturday, 29 August 2015. Entrance is free to the public, but guests are requested to reserve their seats by emailing samrofoundation@samro.org.za.

For interview requests and all other media queries, please contact JT Communications at info@jtcomms.co.za or (011) 788 7632.

About The SAMRO Foundation

The SAMRO Foundation is a registered non-profit organisation that replaced the SAMRO Endowment for the National Arts (SENA) in 2012. The Foundation is the social investment and music education arm of the Southern African Music Rights Organisation (SAMRO) Group of Companies. Since 1962, SAMRO has invested more than R100-million in supporting and nourishing the South African cultural landscape through bursaries, scholarships, commissions, the preservation of music heritage and other industry enrichment projects. For more information on the SAMRO Foundation, visit www.samrofoundation.org.za, follow @SAMROFoundation on Twitter or “like” the SAMRO Foundation page on Facebook.

About the SAMRO Overseas Scholarships Competition

The SAMRO Overseas Scholarship Competition is regarded as the country’s most lucrative music education award, with total prize money currently amounting to some R500 000 per year. Held since 1962, the competition rotates every year between awards for vocalists, instrumentalists, keyboard players (pianists and organists) and composers. At least three SAMRO Overseas Scholarship winners (Kesivan Naidoo, Ben Schoeman and Bokani Dyer) have also been recognised as Standard Bank Young Artist award recipients, and countless others have gone on to pursue successful professional careers as internationally renowned musicians. The main award in each genre (Western Art and Jazz) currently stands at R170 000, to be used by the winners to further their music studies internationally or enrich themselves through master classes. Each year, candidate submissions are evaluated by a panel of adjudicators appointed from the top echelons of music academia and practice.