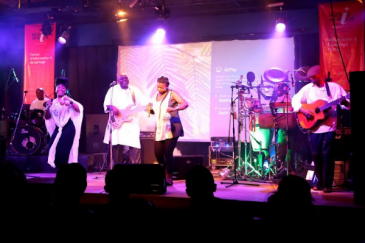 The Music In Africa Foundation will join a host of international and local partners to present a theme called Future Forum: Focus on Africa during the Musikmesse international music fair in Frankfurt, Germany from 8 to 9 April 2016. The initiative is designed to place key focus on the African music sector for the first time in the event’s history. As part of this initiative, there will be a number of activities including panel discussions focused on Africa, an exhibition of African music compositions (scores) presented by the South African Music Rights Organisation (SAMRO) Foundation, a showcase concert headlined by the Cameroonian band Macase who will be collaborating with German musicians after an exchange workshop at the Popakademie in Mannheim, Germany.

In addition, there will be a platform to showcase African instruments and discover African music during the fair. The Music In Africa portal will also be a key focus as one of the platforms playing a pivotal role in connecting the African music sector.

Performances will be headlined by Macase – a talented band from Yaoundé, Cameroon with a unique sound dubbed ‘Bantu Groove’, which fuses international influences and Cameroon’s local rhythms. Formed in the mid-1990s by a group of students who were passionate about music, the group established themselves in 1998 with the release of their first album, Etam, which won numerous awards. Since then, the band has built a reputation for professionalism, versatility and a high-quality live show, ensuring their popularity both at home and abroad.

Partners involved in the organisation of the event include Siemens Stiftung, Goethe-Institut, SAMRO Foundation, Deutschlandradio, the music newspaper Neue Musikzeitung, the German Music Council, Afroton, the Weltkulturen Museum Frankfurt and the Popakademie Mannheim.

After more than 25 years, Musikmesse Frankfurt is now one of the biggest musical instrument and production trade shows in the world. It is held annually each spring at the Frankfurt Trade Fair in Frankfurt am Main, Germany.

The focal point of the forum is five podium discussions with representatives of well-known cultural institutions that will explore the issues of cultural exchange, archiving, copyrights and economics.

Focus on Africa Presentation: Africa’s world of music is just one click away! The online portal Music In Africa

Music occupies a special place in Africa. It is not only part of traditional culture, but is also a potential commercial activity. However, there are very limited resources for preserving music and enabling professional musicians to share experiences or promote their work. The online portal Music In Africa (musicinafrica.net), which was developed by the Music in Africa Foundation at the initiative of the Siemens Stiftung and Goethe-Institut, invites people to get to know and love the music of the continent. With an innovative digital concept, it intensifies the public’s focus on the music sector in Africa, establishes networks and helps create a dynamic civil society. Eddie Hatitye, the Director of the Music In Africa Foundation, will offer insights into the portal (in English).

In Africa, a high priority is placed on oral history. But this tradition is slowly fading. The Internet is providing many people with new and far-reaching access to information. What impact will this have on the music sector? How can traditions be preserved by archiving music and seizing the opportunities offered by digitalization? Dr. Hauke Dorsch of the Archive for the Music of Africa in Mainz and Professor Lars-Christian Koch of the German Phonogram Archive will discuss this issue with Dr. Juan Martin Koch, editor in chief of the “neue musikzeitung.”

Discussion: Not so foreign at all! Cultural exchange with Africa

Africa is becoming of greater interest to Europe. It is the interest in the diverse cultures, the new rhythms and the unbelievable optimism that this continent has to offer. Today, many representatives of German institutions are focusing intensely on the politics, societies and culture of Africa. These individuals include Alya Sebti of the German Institute of Foreign Policy, Johannes Ebert, the General Secretary of the Goethe-Institut, Dr. Stefan Oschmann, the head of the Africa Festival Würzburg, and Dr. Yvette Mutumba, Curator of the Weltkulturen Museum Frankfurt. In a discussion with Jenny Friedrich-Freksa, editor in chief of the cultural magazine Kulturaustausch, these specialists will talk about their wide-ranging activities.

Discussion: TTIP and its impact on Africa’s cultural development

The potential negative impact of the Transatlantic Trade and Investment Partnership (TTIP) on culture and education has already been the source of much discussion and protest in Germany. But Europe would not be the only continent affected by TTIP. In our connected world, the impact of monumental political decisions can hardly be confined any longer within national and European borders. Rather, thinking has to extend well beyond them. Christian Höppner, the President of the German Cultural Council, Hans-Jürgen Blinn, the representative of the German Federal Council on the Trade Policy Committee of the European Council, and Boniface Mabanza of the Ecumenical Service on Southern Africa, will join Theo Geissler, publisher of the Neue Musikzeitung, in discussing the potential impact of TTIP on Africa.

The musical life of South Africa is colorful and lively. The SAMRO Foundation plays a key role here with its initiatives that support live music. This discussion will explore projects that not only serve as models in South Africa, but are also of interest to Europe mediated by the information platform Music In Africa. Taking part in the discussion will be Andre Le Roux, Director of the South African SAMRO Foundation, and Eddie Hatitye, Director of the Music In Africa Foundation, together with Jens Cording, the project head for music at the Siemens Stiftung (in English)

Makossa and bikutsi, the urban music of Cameroon, combined with a heavy dose of pop drive – this is what Macase is all about. For years now, the band from Yaoundé has been gaining fans in Central Africa and beyond with its inspiring programs and warm, soulful sounds – Frankfurt am Main will finally have its first opportunity to hear the band as well during the trade fair. You will be able to hear Macase in the Brotfabrik during a very special program: In addition to their standard performance, they will present the results of a workshop with the rap legend Krotal and the young singer Danielle Eog as well as students of the Popakademie Baden-Württemberg that was held in Mannheim leading up to the concert. And this is typical of Macase: The band has constantly reinvented itself during its 20-year history. It has integrated new styles by adding young musicians, trying out new things and generating new momentum in the process: a danceable musical journey that stretches across continents. The concert is part of the Musikmesse Festival.

Best practice: Opportunities for the creative industries of Africa

The African economy and interest in trade with the continent are growing. Many strategists think its creative industries, in particular, have exceptionally good potential. But how can we set up a trade relationship that benefits both sides? How do you get the ball rolling? Which approach is promising? Christoph Borkowsky of the World Music Expo (WOMEX), Christoph Kannengießer, Managing Director of the German-African Business Association, and Jay Rutledge, a member of Outhere Records who is active as a culture manager in Africa, will explore this topic with Theo Geissler, publisher of the “neue musikzeitung.”

Presentation: Afroton displays African musical instruments April 9, 6:00 PM – 6:30 PM p.m.; Messe Frankfurt, Hall 8.0, Stand E 50 Afroton is a brand of rhythm, acoustical and melody instruments from all parts of the world with a focus on Africa. As real specialists with a love for detail and African spirit, they have gained a wealth of experience with original instruments and will present samples of their master craftsmanship.

Supporting program: Unique insights into the cultural scene of Africa

Works made by contemporary artists from the collection of the World Cultural Museum in Frankfurt and music videos from Africa will give visitors a glimpse of the creativity to be found on the continent. The sheet music collection of the SAMRO Foundation from Johannesburg will pave the way: Visitors will be able to view the notes of African composers that have never been seen before at the music trade fair. Works will be presented live on stage by pianist Caro Gstädtner and a scholarship recipient of the SAMRO Foundation, the young soprano Andiswa Makana.