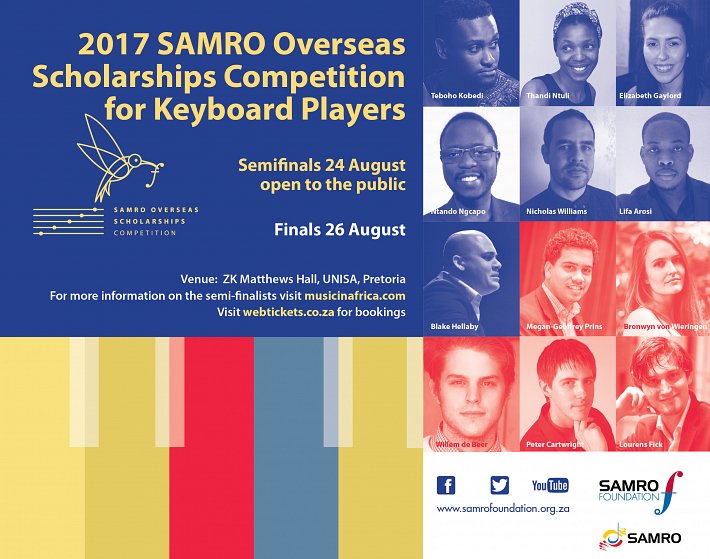 There’s something in the Gauteng soil that fertilises piano prowess, if the SAMRO Overseas Scholarships Competition semi-finalists are any indication. For the first time ever we have seen Gauteng candidates trump the Western Cape in all categories for the competition.

Seven of the 12 semi-finalists in this year’s competition for keyboard players hail from Johannesburg, Soweto, Pretoria or the Vaal triangle. Most of these Gauteng-born candidates have gone on to study jazz or classical music at one of the province’s universities or performing arts institutions, and are already proving their musical mettle as valuable assets to the local music industry.

The SAMRO Foundation is currently gearing up to host the 2017 edition of the SAMRO Overseas Scholarships Competition, which this year sees the semi-final round on Thursday 24 August and the final round on Saturday 26 August taking place at UNISA’s ZK Matthews Hall in Pretoria.

Twelve high-achieving young semi-finalists – seven jazz geniuses and five Western Art music marvels – have been selected to be put through their paces in a bid to clinch one of the two R200 000 scholarships up for grabs.

Ahead of the field being narrowed down to two pianists in each category for the final round, here’s a quick look at the seven piano whizzes who are flying the Gauteng flag high in the competition:

Lifa Arosi (28, from Johannesburg) is a pianist, composer and music producer whose mother is the acclaimed singer Suthukazi Arosi. Having studied at the Campus of Performing Arts, Lifa has since toured extensively, while recording and producing his own music (and that of other artists) and serving as the music director for the Rockwood Theatre in Pretoria.

Elizabeth Gaylord (24, from Johannesburg) studied jazz piano with Dr Andrew Lilley at the University of Cape Town. She has performed at several festivals and last year, she played in the Standard Bank National Youth Jazz Band under the direction of Carlo Mombelli. Elizabeth now works as a composer, performer and jazz educator.

Teboho Kobedi (23, from Sebokeng) is a pianist, vocalist, composer, recording engineer, teacher and aspiring producer who is studying jazz and popular music at the Tshwane University of Technology under Dr Roland Moses. He is proud to have played in France at last year’s centenary commemoration of South African soldiers who died in World War One.

Ntando Ngcapu (26, from Soweto) was enrolled in the Soweto Youth Music Development programme and, after attending the National School of the Arts, was awarded a scholarship by the Berklee College of Music to attend its summer semester programme. He graduated from the Tshwane University of Technology with a music diploma in 2015.

Thandi Ntuli (30, from Soshanguve) is the niece of pianist and Harari vocalist Selby Ntuli. She obtained a BMus in jazz performance from the University of Cape Town. Thandi has since worked with artists across genres and her debut album, The Offering (2014), made such an impression on the local jazz scene that it earned her a Metro FM Award nomination.

Peter Cartwright (28, from Johannesburg) has performed extensively around South Africa, as well as in the United States, Botswana and Zimbabwe. He holds an MMus from the University of the Witwatersrand, where he is an accompanist, piano tutor and concert organiser. He is registered for a PhD under Professor Malcolm Nay and Pauline Nossel.

Note to editors: The 12 semi-finalists in the 2017 SAMRO Overseas Scholarships Competition for keyboard players are:

For interview requests, access to photos and media queries please contact Dee’s on media@jtcomms.co.za or (011) 788 7632 Issued by JT Communication Solutions on behalf of SAMRO Foundation - www.samrofoundation.org.za