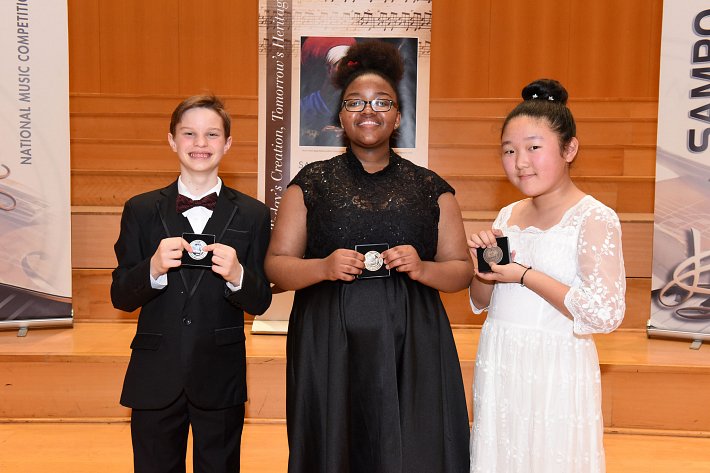 This is the 31st year of the high-level music competition that has seen many of its previous winners achieve great success as international musicians. The competition is organised and presented by the Tygerberg branch of the South African Society of Music Teachers (SASMT) and was inspired by the society’s own Prof Hubert van der Spuy.

This year’s 40 young participants from across the country tirelessly practised their craft to be selected for the competition that ran over the course of four days. Only eight, however, made it through to the final round that took place on Friday 20 September, 2019.

The mission of the competition – to offer talented young music learners the opportunity to learn from one another in a competition environment and compete on a national level – came into fruition as these eight finalists took their turns on the stage. 13-Year-old Helen Lin-Lin Liu was the single violinist on the stage, while Kian Goliath (12) and James Cilliers (13) were the only saxophonists to make it into the final round. Along with Teboho, Madison le Roux (12), Heinrich Sutton (12), Tanya Zhu (11) and Stefan Suter (12) competed on piano.

All of the week’s performances were taken into account by the three adjudicators, violinist Johanna Roos, flautist Khanyisile Mthetwa, and pianist Philippus Hugo when they sat down to make their decision. The depth of talent in this year’s pool of finalists, however, made it nearly impossible for the audience to predict a clear winner as they waited for the results. But Teboho’s compelling performances throughout the week proved to be worthy of no less than seven prizes.

The Gauteng-based pianist captivated the audience on the final night of the competition with a performance of pieces by Mendelssohn, Bach/Marcello, ending with Berkovich’s “Variations on a Theme of Paganini” – a piece well-known for both its difficulty and emotional depth. Teboho’s fingers, however, danced from key to key, ending her performance with a dramatic flick of her hand in the air as the last notes died down. Not only did she win the night with the competition’s coveted first prize of R15 000 and a gold medal, but she also received a further six accolades, including for the best performance of a baroque work in the first round, as well as the category prize for piano.

Dressed in all-black garb with a flair of red around the seam of her skirt, Teboho was all smiles as she got up time after time to receive her prizes. But the Johanna van der Spuy first prize brought the biggest smile to her face. As the news was still sinking in, Teboho said that it was a culmination of a dream she has had since the age of 10. “I’m really grateful that I am actually holding this medal,” she said. “I feel great, but I’m also really overwhelmed, and I actually can’t believe it.” According to Teboho one of the most important things that she has learnt from her teacher, Dr. Mario Nell, is not to overdo a performance. “Rather play with the emotion that you’re feeling,” Teboho added.

As part of her prize, Teboho will follow in the footsteps of previous winners and play with the Hugo Lambrechts Symphony Orchestra on the opening night of next year’s competition.